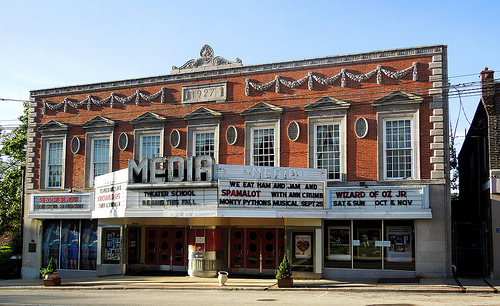 Media is a borough of about 5,500 people located west of
southern Philadelphia. The Mid County Expressway/ I-476 is located less than a mile away, and multiple SEPTA commuter and light rail systems service Media to conveniently bring commuters to Philadelphia and other areas.

Known for its rich culture and history, the borough has been continuously settled since 1681. There are many beautiful and majestic buildings located in the area, such as the majestic Bank Building on State Street and the Media Armory.

The Media Theater is one of the borough’s most iconic landmarks. The art-deco theater was built in 1927 as a place to showcase touring vaudeville acts and Ã¢ÂÂtalkie” films. Now, the building is known as the Media Theatre for the Performing Arts, and it puts on several musical and dramatic productions every year.

Media also offers many boutique shops and fine dining experiences, in addition to an active night life. The borough can boast that it was the first fair-trade town in America, serving only fair trade agricultural products in its shops and cafes.

Despite the ample social opportunities for singles, the borough is home to many families. The area is served by the Rose Tree Media School district with several quality schools nearby for children of all ages.

An abundance of parks are also located in Media. Barrall Community Park is located within the heart of the borough, and Glen Providence Park and the expansive Ridley Creek State Park are also nearby.

Media thus offers a little something for everyone. If you are looking to buy or sell a home, we would love to be your Media real estate agent. Click the button above to browse our luxury Media real estate listings.